From Pierogies to Politicians

King Street restaurant a landmark since 1947

The Blue Star restaurant in Welland doesn’t just have customers, it has lifers and they haven’t missed too many calls to the table.  Kids who came in to eat with their parents in the 1940s are still pulling up a chair.

For a restaurant without any airs, the Blue Star has a wall full of awards that's say the community loves them and feels right at home.

From Pierogies to Politicians, and from the Blue Star's signature broasted chicken to the banter that mixes with clink of China and coffee pots, the Blue Star is both landmark and a legend.

Family owned and operated since 1947, the Blue Star is co-owned by John and Renée Plentai and brother-in-law Brian Mareau. Read the fascinating history, a family story, a success story on Facebook at Blue Star Welland.

Since the early days with John's parents Charles (he knew every body as a friend) and Gertrude (the heart behind the restaurant). It's always been community first. From comfort food to low-carb options, it's a big choice menu with new items being added all the time.

The Blue Star is undergoing many upgrades with the new booths and a new menu. It ties perfectly with the city's plans for King Street revitalization area. Catering community events remains a big part of the operation and the friendly atmosphere will never change. "We've tried to stay true to the original recipe" says Renée. The same is true for John who makes everyone feel welcome with his signature expression "you're the best."

Renée credits 37 staff members including Rudy Cools who has been the Blue Star chef for more than 30 years."This staff is The frontline. We appreciate each and everyone of them for their hard work and dedication."

And there's high praise from the Blue Star staff including Mary Ann Houser and Tina Miekle who say "I couldn't ask for a better boss. He's always been there for his staff."

The Blue Star restaurant is located at 676 King St. and Welland. Hours are Sunday to Thursday, 7 AMTo 9 PM; Friday and Saturdays, 6 AM to 9 PM. Phone 905-732-2459. Check out the weekly specials on Facebook at Blue Star Welland

Check out our full menu.

I would like to thank all my staff for helping us achieve this award.. Thank You to everyone staff and customers who voted for us and make this possible .. Couldn't do it without you all.. Let's all keep up the good work.. Thank you again everyone ... JOHNNY 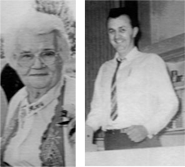 A legend lives on

The Blue Star is a success story, a story of taking a gamble, a strong belief in the future and a lot of hard work, dedication and people skills.

Call Us From Your Cell